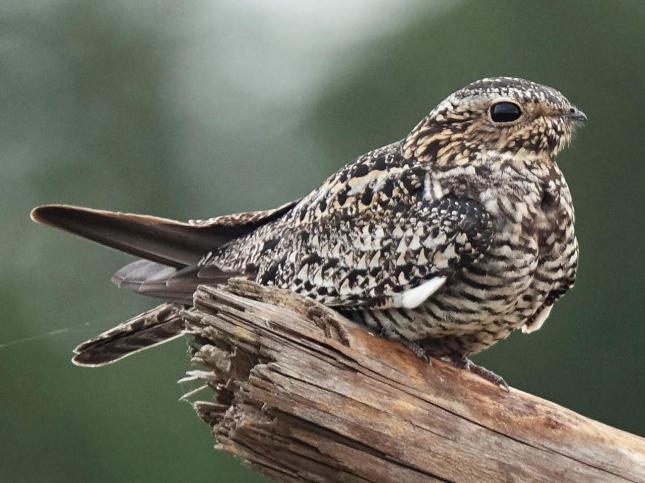 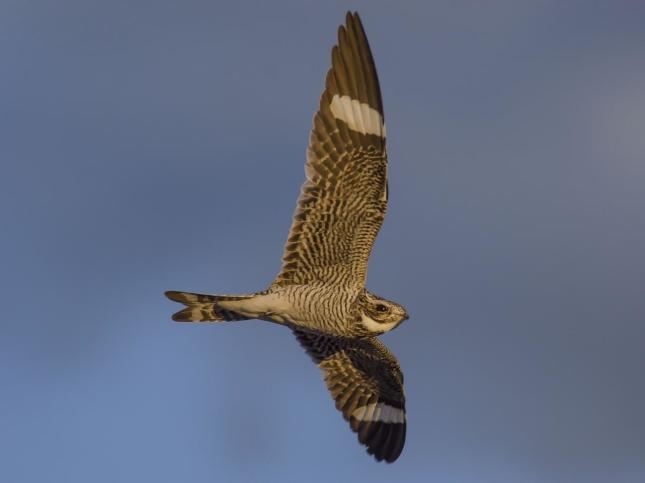 Your best chances for seeing our September Bird of the Month are at dawn and dusk. The Common Nighthawks eat flying insects almost exclusively, and at dawn and dusk they forage for flying insects. Common Nighthawks are most active from half an hour before sunset until an hour after sunset, and again starting an hour before sunrise (ending about 15 minutes after the sun comes up). Pick a high overlook with a good view of a river, if possible. In towns, look for nighthawks over brightly lit areas such as billboards, stadium lights, and streetlights. These areas are usually magnets for flying insects! Scan the darkening sky and you’ll likely find some bats zipping around with their frenzied flapping—but look for a larger, bounding, long-winged shape. They fly with looping, batlike bouts of continuous flapping and sporadic glides.

The female probably selects the nest site, usually on unsheltered ground, gravel beaches, rocky outcrops, and open forest floors. Nests are typically out in the open, but may also be near logs, boulders, grass clumps, shrubs, or debris. In cities, Common Nighthawks nest on flat gravel roofs.
Common Nighthawks, which have one of the longest migration routes of all North American birds, sometimes show up far out of range. They have been recorded in Iceland, Greenland, the Azores, the Faroe Islands, and multiple times on the British Isles.

Sadly, the U.S. Common Nighthawk populations declined by almost 2% per year between 1966 and 2014, amounting to a cumulative decline of 61%, according to the North American Breeding Bird Survey. The 2014 State of the Birds Report lists Common Nighthawk as a Common Bird in Steep Decline, and the species rates an 11 out of 20 on the Partners in Flight Continental Concern Score.