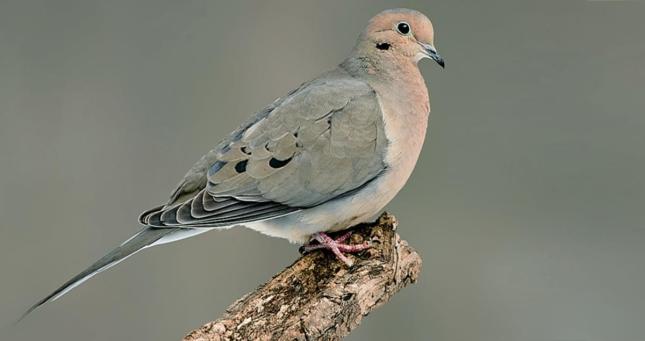 The Mourning Dove is a graceful, slender-tailed, and small-headed bird that is common across the continent. Mourning Doves perch on telephone wires and forage for seeds on the ground; their flight is fast and bullet straight. Their soft, drawn-out calls sound like laments. When taking off, their wings make a sharp whistling or whinnying. Mourning Doves are the most frequently hunted species in North America.
To attract Mourning Doves to your yard, scatter seeds, particularly millet, on the ground or on platform feeders. Note of caution: birds that spend much of their time on the ground are vulnerable to prowling cats. Having a platform feeder that the Mourning Doves can access can help keep them safe. They are typically too large to access tube feeders and even some hopper feeders.

Cool Facts:
• Mourning Doves eat roughly 12 to 20 percent of their body weight per day, or 71 calories on average.
• The Mourning Dove is the most widespread and abundant game bird in North America. Every year hunters harvest more than 20 million, but the Mourning Dove remains one of our most abundant birds with a U.S. population estimated at 350 million.
• The oldest known Mourning Dove was a male who was at least 30 years old when he was shot in Florida in 1998. He had been banded in Georgia in 1968.